How CELTIC-NEXT is delivering on its new ambitions

For CELTIC-NEXT, 2021 was a year of renewal and change. 2022 is a year of implementation: translating the new roadmap into partnerships and calls, designing the Space ICT flagship programme, acquiring new Core Group memberships, and implementing the first official inter-cluster joint thematic call of the Eureka Clusters Programme on accelerating industrial sustainability.

Before going into the other topics, let me first share on behalf of the CELTIC Office our deepest compassion with our Ukrainian colleagues and their families. We are worried about the destiny of those who were not able to flee or had to stay and fight the invader. Our attempt to contact them was not successful. Our only hope is that this is because our contact attempt was their lowest priority, and they did not find the time and energy to answer.

Translating the new roadmap into ­partnerships and calls

In the first half of 2022, we have pursued the implementation of CELTIC’s new roadmap by running several actions, and we will continue to do so in the second half. We are presenting this roadmap in our Proposers’ Days, to allow consortia to propose innovative projects in the large number of fields of technologies, applications, and verticals of the roadmap. This is our traditional bottom-up approach. We will continue to run our Spring and Autumn Calls as per our successful history. This is a unique selling point of CELTIC as a Eureka Cluster compared to other international funding schemes. And it will remain so in the future.

Secondly, we are entering into new partnerships to enhance our funding impact in the global ICT community, as well as in other industries. Those partnerships will nourish further our roadmap and attractivity to Public Authorities to fund impactful innovative projects across and beyond the Eureka and European countries. This is already bearing fruits with the joining of two new CELTIC Core Group members: SES S.A. and CELLNEX Telecom.

One of the new partnerships has already been signed with ESA, the European Space Agency, in the form of a Memorandum of Intent (see the Space ICT article in this issue of CELTIC News). CELTIC and ESA will coordinate efforts and exchange on terrestrial network and non-terrestrial network convergence and cooperation. Some of those new partnerships, as for example the one with ESA, will be translated into flagship programmes and associated calls.

Space ICT has become a subject of high attention for industry and governments, and this has been strongly reinforced by the effects of the COVID-19 pandemic and the war in Ukraine. A clear sign has been also sent by 3GPP, which has now opened wider doors for the inclusion of SatCom besides the traditional backhauling role. The MoI will encourage terrestrial ICT and Space ICT industry collaboration with other industry verticals to facilitate the adoption of advanced Space ICT technologies in the business models and processes of all industry sectors.

CELTIC-NEXT and ESA are working together to define a joint roadmap of technologies, use cases and agenda of calls. ESA is a key actor in the development of all aspects and fields of space activity. Once the first roadmap and an agenda of calls are ready, CELTIC and ESA will advertise them. The joint roadmap and agenda should be defined during the first half of 2022, and the first CELTIC Space ICT flagship call should be announced for the second half of 2022.

CELTIC has started to approach potential new Core Group members to enrich its DNA. And CELTIC is proud to have added two strong new members with headquarters based in Europe to its Core Group:

SES S.A. is a leading satellite operator. With over 70 satellites in two different orbits, their reach is unlike any other. They combine a vast, intelligent network of satellites and ground infrastructure with industry-leading expertise to manage and deliver high-performance video and data solutions virtually everywhere on the planet. SES S.A. already delivered a keynote in the ECP Joint Sustainability Call 2022 Webinar in Luxembourg.

CELLNEX Telecom is a leading infrastructure operator for wireless telecommunication in Europe. Cellnex has made a firm commitment to developing its network, which currently comprises around 128,000 sites. 71,000 of them are already in the portfolio and the rest in the process of closing or planned roll-outs up to 2030, which perfectly positions the company to develop new-generation networks. CELLNEX provides services in Spain, Italy, Netherlands, United Kingdom, France, Switzerland, Ireland, Poland, Portugal, Austria, Denmark, and Sweden thanks to the investments undertaken to boost its transformation and internationalisation. CELLNEX already delivered a keynote in CELTIC’s Spring Call 2022 Proposers’ Day.

Other prospective new Core Group members will be approached this year. 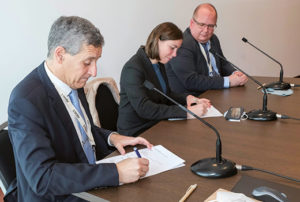 After having led the two pilot pre-ECP joint calls on AI, CELTIC-NEXT has contributed to the first ECP Joint Call targeting the acceleration wof industrial sustainability, with the two sub-topics chosen by the 16 participating Public Authorities:

The timeline of this call is shown in the figure.

Information about the call, which closed on 2nd May 2022, is available on the Sustainability Call Website at https://eureka-clusters.eu/sustainability.html

2022 is and will remain a challenging year for many topics. Joint collaborative innovation and knowledge exchange are among the best weapons against pandemics and wars. Our ICT community is one of the best positioned to understand and support this. Cybersecurity, resilience of critical infrastructures (for example with SatCom), and misuse of ICT technologies against people and nations are certainly topics to be ranked now as absolute priorities in the new world that is in front of us. CELTIC has made a collaborative proposal to its fellow Clusters within Eureka and will try to elaborate a strategic programme in that direction towards Eureka funding bodies.