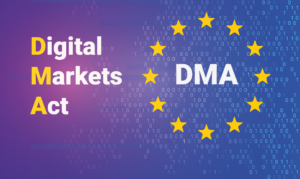 On 24 March 2022, the European Parliament and the European Council agreed to introduce new EU rules via the Digital Markets Act (DMA) to limit the market power of big online platforms. The DMA will ban certain practices used by large platforms acting as “gatekeepers” and enable the Commission to carry out market investigations and sanction non-compliant behaviour.

The text provisionally agreed by Parliament and Council negotiators targets large companies providing so-called “core platform services” most prone to unfair business practices, such as social networks or search engines, with a market capitalisation of at least 75 billion euro or an annual turnover of 7.5 billion euro. To be designated as “gatekeepers”, these companies must also provide certain services such as browsers, messengers or social media, which have at least 45 million monthly end users in the EU and 10,000 annual business users.

In three-way talks between Parliament, Council and Commission, also known as trilogue, EU lawmakers agreed that the largest messaging services, such as WhatsApp, Facebook Messenger or iMessage, will have to open up and interoperate with smaller messaging platforms upon request. Users of small or big platforms would then be able to exchange messages, send files or make video calls across messaging apps, thus giving them more choice. Regarding interoperability obligations for social networks, co-legislators agreed that such interoperability provisions will be assessed in the future.

The envisage new rules also aim to ensure that combining personal data for targeted advertising will only be allowed with explicit consent given to the gatekeeper. Furthermore, users should be allowed by gatekeepers to freely choose their browser, virtual assistants or search engines.

The Commission had proposed the Digital Markets Act in December 2020 to address the negative consequences arising from certain behaviours by online platforms acting as digital “gatekeepers” to the EU single market.