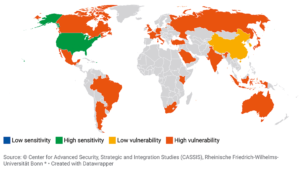 Digital dependence of EU countries remains high. This is a central result of a research report published by the Center for Advanced Security, Strategic and Integration Studies (CASSIS) at University of Bonn in April 2022. The report summarises the key findings of the Digital Dependence Index (DDI), which measures the dependence level on different technology sectors of 23 countries.

In 2019, 87 percent of countries were highly vulnerable. Although the global dependence structure remained stable since then, there are substantial changes.

China, South Korea, Russia, Kenya, and the US became more autonomous in the last decade. Japan and Indonesia, on the other hand, experienced the most pronounced increases in digital dependency while the positions of the other 16 countries changed very little.

The US is by far the least digitally dependent country and has even widened the gap towards the other countries since 2019. Only China and South Korea managed to reduce the gap towards the leader. China, in particular, made the greatest gains during the last ten years.

European countries have maintained a highly vulnerable status, while their autonomy gap to the US, China, and South Korea widened, as European countries have fallen behind in every dimension compared to the three most digitally autonomous countries. According to the report, Europe’s digital autonomy has eroded in the last decade. The reason is that digital interactions have become more asymmetric with China (ICT trade dependence), with the US (infrastructure and platform dependence), and the East Asian region (intellectual property dependence).

The authors of the report recommend that European countries should rethink their entire approach to digital technologies and employ a much more comprehensive and bold approach, in order to increase digital autonomy.